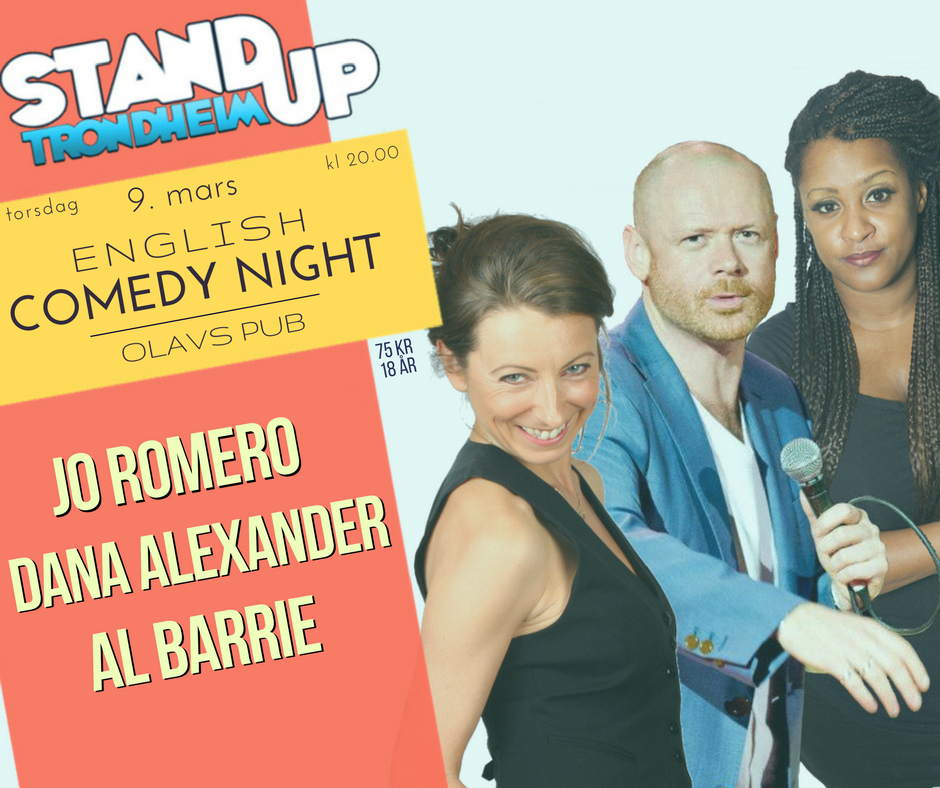 Lo and behold! We are very proud to present these three fantastic English-speaking acts from the UK and Canada:
Al Barrie
Jo Romero
Dana Alexander

AL BARRIE
'Excellent' - The Independent
'A class act' - The Scotsman

Comedian, actor and writer Alistair Barrie has been performing all over the world for nearly an entire century (this one). Much in demand as both a headline act and MC, he has performed throughout the UK and Ireland, as well as further afield in places like the States, Australia, South Africa, India, Cyprus, Luxembourg, Qatar, Bahrain, China, Singapore, Indonesia, Cambodia and as well as at the world's highest gig on a mountain in France and on a boat in the middle of the North Sea. And now Trondheim!

Alistair has made numerous radio and television appearances across the world. A regular at corporate events and festivals, he has taken five solo shows to the Edinburgh Fringe and written on several shows for the BBC, Channel 4 and Radio 4 and for a number of other comedians.

JO ROMERO
Jo Romero is an accomplished, unique, warm and likeable stand-up comedian. She’s likeable and fun, and the cheeky side to her personality always shines through the nonsense, Jo is a very energetic and expressive performer, her material always sounds truly "felt" as well as being very funny. An act that truly makes you understand that laughter is a combination of joy and fear.

She began performing stand up in 2001, and was Finalist in the Wilkinson Sword Cutting Edge of Comedy, also semi-finalist in the BBC New Comedy Awards 2001, Daily Telegraph New comedian of the year, BBC Comedy Awards and So You Think Your Funny CH4. Since then Jo has been regularly performing comedy on the London, UK and International comedy circuit.

DANA ALEXANDER
Dana Alexander is currently one of Britain and Canada’s hottest emerging young comedians – her style has been described as smart, irreverent and revolutionary

Dana Alexander began her career at the age of 18 years old in Canada, before long she began touring nationally with Yuk Yuk’s Comedy Clubs and completed 5 television galas and a handful of radio spots. In 2011 Dana made a move to the UK where she premiered her one woman show at The Edinburgh Fringe Fest. After rave reviews and several nominations including “Best Comic” and “Best International Act” from Chortle and Black Comedy Awards.
It was not long before she began working in television on BBC programs like Russell Howard’s Good News and Edinburgh Comedy Fest in 2012 and featured on The Culture Show in 2013 for BBC 2.
Dana continues to tour within in the UK and Internationally in more than 23 countries including Switzerland, Croatia, France, Norway, Serbia, Bahrain, Seychelles, Hungary, Malta, South Africa and Holland. As well as for the British Troops. A must see Comic.